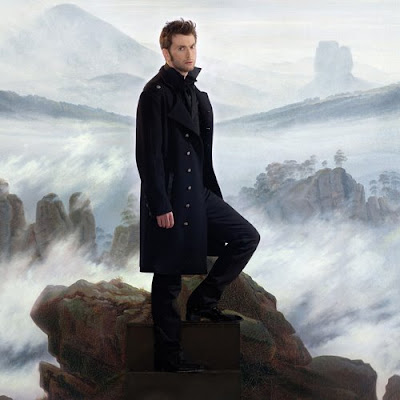 On the 1st January Mum, Andy and I headed to the Novello Theatre to see Hamlet. Mum has been looking forward to seeing it for ages as she is a massive David Tennant fan. I too was quite excited as I love Shakespeare and I also think David Tennant is pretty good. We bought the tickets back in the summer for the London show as the one in Shakespeare's home town, Stratford-Upon-Avon, had sold out.
However back at the beginning of December, David Tennant had to pull out of the play due to a back injury that required surgery. Mum and I hoped he would be back on stage in the New Year but just before Christmas Mum received a letter from the Royal Shakespeare Company confirming that he would not be performing on the day we had tickets. We were gutted.
But credit where credit is due. Tennant's understudy Edward Bennett was very good and gave a great performance. The rest of the cast were also brilliant and we were all throughly impressed. I am looking forward to seeing more RSC performances in the future!
What was even more frustrating for us was that Tennant was back on stage a mere 3 days after we went. Oh well. Ce la vie!
But this is one for the list - my first play of the year and January covered. Now I just have to find a play for February.
Email Post
Labels: Going Out New Year Challenge