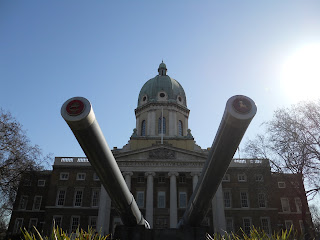 We had a sort of free weekend this weekend. So we decided to be cultural.
First stop was Joe's Kitchen in Borough for some much need breakfast after a big night out at the Intrepid Fox the night before. If you are ever near Borough Station I highly recommend popping in for their fantastic breakfast and brunch offerings.
Walking down to the IWM from London Bridge was quite straight forward and pleasant thanks to the rare glimpse of spring weather London experienced on Saturday.
The last time I went to the IWM I was still at primary school. I think I was around 7 or 8 - either way it was a while ago. 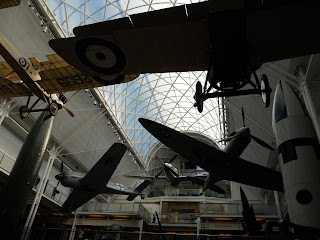 Upon walking in your are greeted by some impressive looking rockets, missiles and tanks. Something that caught my eye was a burnt out crumpled car. It was a new exhibit taken from the aftermath of a bombing in a Bagdad marketplace. More on that later.

We decided to start at the bottom and work our way up. The ground floor houses exhibits from World War I and World War II plus recent conflicts.
One of the most staggering facts for me was that there has only been one year since the end of World War II where British servicemen have not been in action. This was made even more real by the recent conflict displays. We couldn't help having a sinking feeling of how much bigger this part of the museum was likely to get as the years go on. As with the car that had caught my attention on arrival, it felt like the beginning of something that could in itself become as big a part of the IWM as the displays taken by WWI and WWII.

A sobering through made even more real by learning coalition forces had started to enforce the no-fly zone over Libya.
Something I found quite interesting was the recycling drive that took place during WWII. 'Make do and mend', 'Dig for Victory' and other initiatives to recycle rubbish, make the most of food and growing your own to survive. This was an attitude that underpinned the UK during the grip of war. I'm not sure it was ever completely lost but you do get a sense these days with recycling drives by local councils and the throw away culture that we have developed that it has been lost to a degree.

We spent 4 hours in the museum and only managed to completed the majority of the basement. We left planning a return trip and making sure we made a generous donation for our time there. And of course, we couldn't leave before visiting the gift shop. I think on my return I will be getting the little book of Marmite with some great little recipes. There are also a few others that I have my eye on.
In summary - if you haven't been, go! It's well worth it and free (although I would highly recommend making a donation). 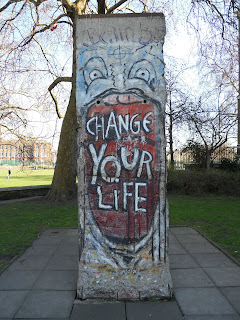 (message from part of the Berlin Wall)