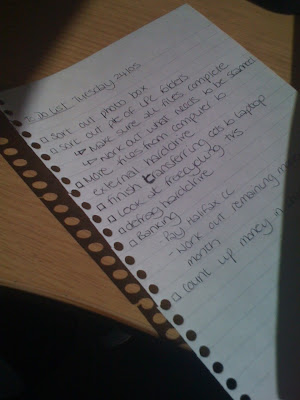 My to do list seems to be getting longer and longer. On top of the New Year Aims I am struggling to find time to do stuff - both at work and home. There really are not enough hours in the day.

Last night I thought I would attempt to complete all of the points on my list. In total I really only completed one and even that wasn't fully. So my LPC folders are now in a slightly more comprehendible order and a much neater pile but it will take me ages to scan in all the relevant documents so I have everything on a hard drive which fits into the palm of my hand rather than a stack of folders which take up too much room space (I can't even fit them on the bookshelf as there are too many). I also wish at the time I had typed my notes and done more on the laptop rather than write things out. I guess I am a little old school in that respect.

I also made a start on my photo box. I have a rather large box of photos collected from a time before digital cameras. The only problem is I have HUNDREDS of them. And some of them are blurry and a fair chunk you can't even tell what the picture is of. So I began the mammoth task of sorting through the photo shop envelopes finding some highly amusing photos in the process and a number which left me puzzled as to why I had taken such an obscure photo (although the ones I found of Welling High Street, although bizarre, were for a geography project).

I labelled up what I looked at (Uni, Christmas, Speedway, Random etc) and though I was making great progress, until I looked into the box and saw how many more there were. Humph. At 11pm I called it a day and decided sleep would be a good idea. Looks like I have a project for the Bank Holiday!

I am sure by Monday though I will have thought of at least another 5 items to add to the list!