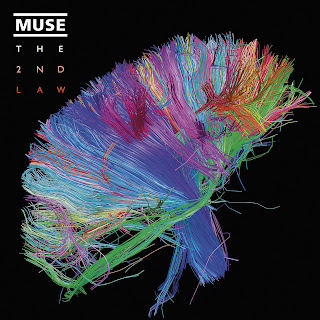 I am wrestling with my decision to even include this in the top ten this year but on the strength of the tracks alone it has made it to No.3.

When the trailer for The 2nd Law made an appearance in June I could not have been more excited. At first listen to the clip of Unsustainable I was worried we were going to have a repeat of the Resistance but then that bassline hit and WOW. It reminded me of the time I listened to the clip of Stockholm Syndrome prior to the release of 2003's Absolution (still their best album by far in my mind!).

But then came Survival. Oh dear, oh dear, oh dear. I absolutely hated it at first. The Olympics video that accompanied it did make it more bearable and it made sense in some respects but then Muse you went and ended your first night at the O2 with it. Let me be clear - THIS IS NOT A SONG TO FINISH A GIG ON! Knights of Cydonia? Hell Yes! Hysteria - yes. Even Take a Bow was great but not this. As my brother pointed out - there is no tune - it is the same notes the entire way though. Come guys - you can do better than that.

So by the time the album was due for release my initial enthusiasm had somewhat waned.

On to the album itself - the theme is supposedly the second law of thermodynamics. Basically a system based on endless growth with limited resources is unsustainable. Translation - the human race cannot survive on a system of endless growth. The concept is great but it is lost in the album.

The album to me is almost like a best of. There is no consistency of sound, all the tracks sound different except for the last two tracks which do sound like they both belong on the same disc. The tracks really show the influences to Muse but their own sound is lost. In fact Chris Wolstenholme's track Liquid State is probably the only track I would put under the banner of "Classic Muse".

So based on the above, why on earth is this in my top 3? Because the tracks on their own are actually really good. Ok, they might sound like Queen or Inxs or U2 but they are great tracks. There is only one track on the album I consistently skip which is Explorers (ironically the last line of the song is "go to sleep" but generally by the end of the song I already have). Even Survival is bearable.

It took a couple a lot of listens but compared to The Resistance, this is a good album. Sadly though it is overproduced which stopped it climbing higher up the list. It sounds the same live as it does on my iPod which is a let down. I really wanted this to be my No.1 and on the trailer alone I really thought it would be. Instead it will have to settle for No.3.