It's that time again when @chrisnotwell and I compile our Top Ten Albums of the Year.

This year has been tricky. There have been a lot of great albums but if I am honest, not many have really grabbed me and said "There is no doubt I will be in your Top Ten". So choosing my top ten this year has been hard. There were 4 albums that were dead certs but allocating the rest of the 6 places was hard. And my list has gone through a number of changes before settling on what I have. To be honest, I am not entirely happy with it as some of the albums that didn't make it are pretty awesome!

I post more about the didn't make it's nearer the top spot placing but for today, here is the album that made it to No. 10. 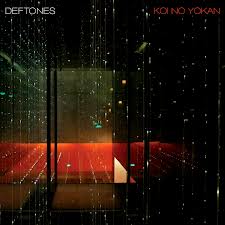 Diamond Eyes was a phenomenal album by Deftones and it was always going to be hard to follow it. But although not as good as Diamond Eyes, Koi No Yokan is still pretty awesome! I've only listened to it a handful of times due to it being a late release in 2012, but it is really growing on me.

My favourite track is Tempest.