The big day came and went on Sunday. The weather on Saturday as I went to pick up my race number was horrendous filling me with fear for the Sunday. We lost another umbrella to the relentless winds that have battered the UK for months now.

I also learned that if you need to eat at a restaurant before a run it's best to book. Nowhere serving pasta had a spare seat. In the end we opted for Wagamama as rice is also high in carbs. I thoroughly enjoyed it and I don't feel it affected me on the day which is the main thing.

We gathered in the morning at Preston Park. It was raining and the rain from the day before created a festival atmosphere as everyone waded through the mud to the toilets and start points.

As soon as the gun went off it stopped raining and within a few minutes it was perfect running conditions - overcast, warm with a slight breeze. Great.

Despite the hills I really enjoyed the first half of the marathon. It took me out to places I hadn't been to before and the support was great. At the half way mark I passed the Cancer Research cheer team and got a huge roar from them. Once I was past mile 15 I was into unchartered territory and that is when I started to hit the wall. I began by walking a little and then running, walking a little and running to take some pressure off my hips and knees which were hurting by this point. Not unbearable pain, just aching. I carried on around the suburbs of Hove admiring the various parties that were happening in driveways and the immense support given to everyone on the course by those lining it.

At mile 18 I rang Andy needing some encouragement to help keep me going. I had fallen off the pace and found myself on my own a bit which started to eat at my confidence. I felt I was going to be dead last or worse still not finish at all. Andy spurred me on and after a quick loo break I carried on to mile 19 where a young lady called Jody came running up next to me to offer me jelly babies. We got talking (believe it or not it's actually quite nice to talk - it takes your mind off the running) and we agreed to run together to keep each other going. It really helped. Having someone to talk to kept me going. And as Jody didn't want to stop neither did I so from mile 19 we ran all the way to the finish together. 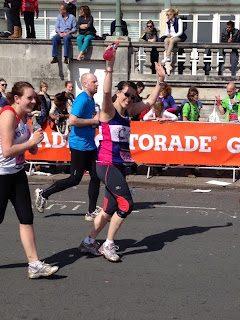 I expected to collapse across the finish line possibly throwing up or fainting with dehydration. But in fact all I had was the biggest grin in the world. One of the organisers put an arm round me as I came across the finish line and asked me how if I was ok. "I'm ok actually" I replied. And I was. I didn't have a surge of adrenalin or feel dehydrated. I wanted my space blanket (because I have never got one before and they look cool) and some water but I was fine. I walked over to find Andy and Sarah and gave them both a big hug, walked down the beach to find Mum and my Auntie Rita and sat down on the beach to stretch. 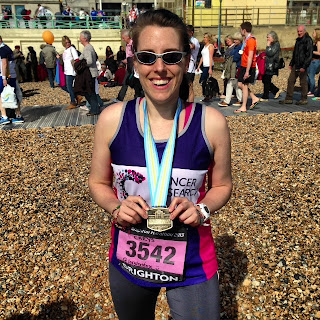 We then wandered further down to a favourite fish and chip shop of mine to get some food and enjoyed it on the beach in the sun. It was perfect. No sickness, no tiredness (when we got back to the hotel to change before heading out to a decent pub Andy fell asleep on the bed whilst I stayed awake!) and not as much pain as I was expecting. In fact I went to the gym yesterday (Wednesday) and even my sport massage therapist was amazed at how quickly I had recovered and how un-tight my muscles were.

I completed the marathon in a time of 5 hours 13 minutes. Not bad for only 10 weeks full training and a dodgy knee. And despite swearing never again on the way round I have already signed up for a half marathon in September and am awaiting the ballot for London for 2014.

But despite the achievement of completing a marathon there was a reason I put myself through training in horrible weather, the pain and the mental anguish.

On the 14th April 1997 my nan lost her battle with Cancer. 10 years after she died I took part in my first 5k for Cancer Research to start raising money to ensure others didn't lose their nan's too.

16 years to the day after my nan passed away, I ran my first ever marathon for Cancer Research. It was mere coincidence on the dates and I'll be honest one that didn't occur to me when I signed up.

And although my first run in 1997 was solely for my nan, every run since I have added a new name to the list of people that I am running for. The good news though is that for every name I have added, they have won their battles with cancer.

Sadly though, not everyone is so lucky. A few days before the marathon news reached me that a friend's sister in law had lost her fight with the dreaded disease. I also was adding another name to the list of people to run for on Friday after a close friend's father was diagnosed with cancer.

One of the sad things during my fundraising was learning how many people have been affected by cancer either directly or through a loved one. It makes me more determined to compete in events like the Brighton Marathon in order to help Cancer Research continue their work to ensure that for every person I add to my list, no one else loses their battle with cancer.

Therefore if you haven't sponsored me but would like to, you can still do so at www.justgiving.com/urban-fox or text UFOX81 and an amount to 70070.