I'm not sure why but lately I have been watching just as many theatre performances as I have been gigs. Personally I blame the Book of Mormon for re-igniting my love of the theatre. Watch something enjoyable and suddenly you realise there is a whole world of musicals and plays to be watched.

So far this year we have been to Cats (odd, didn't make any sense at the time but a read on Wikipedia cleared up the confusion), Avenue Q (touring at the provincial theatres but still awesome - if it is coming to a town near you, get a ticket), and The Rocky Horror Picture Show featuring the one and only Richard O'Brien as the narrator (Myself, Tadders, Mum and Hannah were in our element. Andy was not impressed and sadly did not enjoy it. On the plus side after all my nagging he has finally succumbed and watched it so he can now say with authority that he doesn't like it!).

This week though we were and watch the UK production of Green Day's American Idiot. 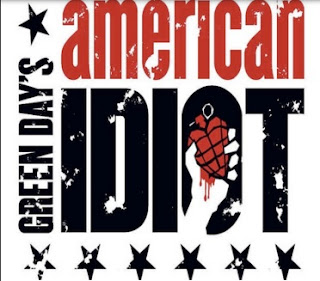 Green Day were the soundtrack to university for me. My first two years consisted of listening to Dookie and Nimrod on repeat (the third year was all about Muse and Eminem). Forward to a world post university and American Idiot was released.

I loved the story in it and was forever hoping that it would be turned into a film or play at some point. So towards the end of the decade when it was announced it would indeed be turned into a stage play I was excited. Only issue - it was only going to be on Broadway.

Had our trip to New York not been so packed last year I might have seen if we could have got tickets to it when we were there. In the end though it was announced it was coming to the UK. I was a bit slow to pick up when it opened though but thanks to a mail shot from StarGreen we had tickets 5 rows from the front.

The Arts theatre in Covent Garden is very cosy and I was surprised it was in such a small venue but it worked so well. To see the concept of the album brought to life was amazing. I sung my heart out the whole way through (not too loud though - I am not Tadders and her friend Caroline at a Book of Mormon performance!).

The tale focuses on 3 friends and the different paths their lives take in the course of a year post 9/11. I could really philosophical and get deep and meaningful as to what I think the play was telling us about America but to be honest - awesome Green Day songs, fantastic acting (I mean really good - I was absolutely blown away by the performances) and a sign-a-long to Good Riddance (Time of your life) at the end - WHAT MORE COULD A ROCK CHICK ASK FOR!!

Next up for me on the theatre front - The Railway Children at Kings Cross Station (seriously I think I have been to the theatre more than gigs this year!!).