Sadly I am writing another tribute post to another artist.

As you may have read, Chris Cornell - lead singer of Soundgarden and Audioslave as well as a well renowned solo artist took his life on Wednesday following a gig in Detroit. Now I do not want to dwell on what happened until we know the full facts but undeniably it is a very sad situation where a husband/father/well loved artist has died leaving a hole in many people's lives.

I missed Soundgarden and Audioslave in the 90's. Back then I was more about pop music for my sins but as my love of rock music grew in the early 2000's I started revisiting eras that past me by and the grunge scene in the North West of America is one that I have really enjoyed catching up on.

Like most people, I knew Black Hole Sun fairly well but the rest of the music had past me by first time round. Finally listening to Superunknown I understand why Mr Fox was such a huge fan.

I have listened to a fair bit of the music he has been a part of but on listening to playlists and tribute programmes there is a lot I still haven't caught up on - early solo records and Temple of the Dog.

In June 2012 we were lucky enough to get almost front row seats to see him playing Songbook live at the London Palladium. It was one of the most intimate gigs I have ever been too and I was even in the picture Chris took from the stage (sadly the image in no longer available on twitter which is a shame).

I hadn't really checked out his solo stuff at that point but I quickly did remembering that he had written and performed the theme for Casino Royal - You Know My Name - a great Bond track.

Last year our friends Debbie and Matt bought us tickets for the Royal Albert Hall for another solo outing by Chris. Much bigger than the Palladium but such an amazing venue. We were spoilt to over 2 hours of amazing songs including a cover of Nothing Compares to You in tribute to Prince. 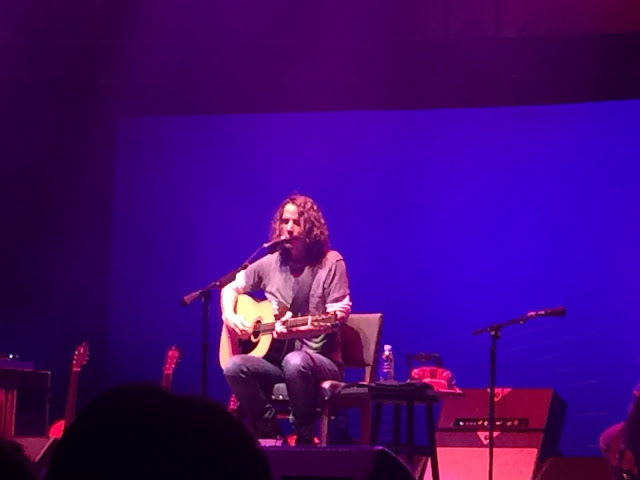 I was over the moon to hear Our Time in the Universe from Higher Truth which is a song I have played a lot since hearing of his death on Thursday morning.


Chris Cornell's passing is profoundly sad. A man you felt still had so much more to give, who managed to be successful in bands and as a solo artist. The grunge era has so many fallen stars already (Layne Staley, Kurt Cobain to name a few) I feel I want to find Dave Grohl and Eddie Vedder and wrap them in cotton wool and protect them from the world.

But I feel I should hand over to Mr Fox at this point. Not only does my husband look a lot like Chris (in fact there are pictures of a young Chris Cornell that scare me as it totally looks like Andy) he was also a huge fan and his passing has definitely hit him a lot harder. He was into the grunge scene back in the 90's so here he is with his words.

There have been many great artists who I have respected and mourned the loss of. Hell, 2016 was a calvalcade of misery as one after another musical legend was plucked from this earth at an alarming regularity. It always seems trite to say 'too early' as invariably rockstars burn brightly in the eyes of their fans and so to be without them will always be, by definition, 'too early', however hearing the news on Thursday morning hit me like a hammer. I was stunned and couldn't believe it and as the story unfolded, it just got worse and worse. Now, aside from feeling awful for his family, friends and bandmates, it got me thinking about how I came to be feeling genuinely upset at the passing of someone who had simultaneously meant so much to me but I had never really met.

To put it into context, and showing my age a little more than Mrs Fox, the 1990's were the start of my musical awakening. I think there were 5 bands of the early 1990's that affected me; Nirvana, Rage Against The Machine, Dinosaur Jr, Pearl Jam and Soundgarden and yes, as Carys eludes to, I was unashamedly into the grunge scene (still am actually). It inspired me to play bass guitar as well as focus my attention on making something of myself; which might sound weird but connecting with music gives you a whole lot of confidence, which is pretty important when you are looking to 'find yourself' in a small provincial northern town. Anyway, of all the bands Soundgarden always had a special place in my heart and the reason was the vocal power Chris Cornell brought to the records. It was amazing to hear the range from a low growl right through to a ear splitting scream; dynamically, I think he was up there as one of the best...but it got better with his solo stuff.

Euphoria Morning was perhaps the most criminally underrated albums of its time; I remember hearing it pretty soon after it came out and was instantly hooked but I don't recall it getting an amazing reception. Later albums got more exposure with the Audioslave tie up but this was the album that introduced me to the solo artist and I remember playing it constantly.  The other albums I loved, although I admit to struggling a bit with 'Scream' but over the years I have come to appreciate it too. 'Carry On', 'SongBook' and 'Higher Truth' are all in my all time favourite albums and have scarcely been off the playlist this week.

Trying to put my finger on why his death has affected me so much is tricky; yes, I saw SoundGarden play a fair number of times and sat within 10 feet of the front of stage at a solo gig in 2012 and again in 2016 but that doesn't really explain it. A friend of mine commented that it felt like 'one of ours' which, considering that metaphorically speaking, I grew up with Chris Cornell, feels about as close as I can get to an explanation. Many people have already commented on the unfortunate and clear mental issues that appear to be at play; how can someone with so much talent, a beautiful family and adored by millions possible find themselves in a situation where taking their own life seems like the only way to go? Having been mercifully free of mental illness, its not for me to comment  but having seen the effect depression has on people and still feeling the effects of the loss of a close friend who recently lost his battle with depression, it's an indiscriminate bastard and should be taken seriously.

Reach out to your friends and keep in touch with them...

In closing, I'm clearly not the only one feeling this loss and a while there remains a rich musical heritage, I can't help but feel there was so much more to come..... very sad times. RIP