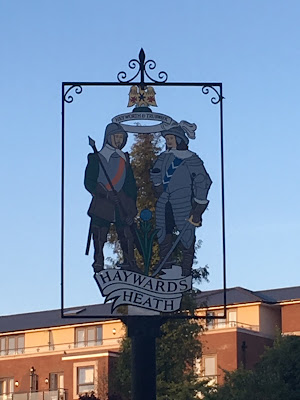 I am not sure if I can officially call myself a country fox. Haywards Heath is a town but it is definitely smaller than other towns I have lived in over the years such as Northampton and Erith (although technically Erith is part of London so actually a suburb rather than a stand alone town).

It has some of the high street stores you expect to find - Boots, WH Smith, and Superdrug. It also has Holland and Barrett, Mr Entertainer, Next, Fat Face, Laura Ashley, Marks and Spencer, Waterstones, Game and Claires Accessories on the shop front and Costa and Nero on the coffee shop front. There is even a Starbucks in the local Sainsbury's and we also now have a Waitrose (the sign of an up and coming area apparently). But it certainly doesn't have some of the other shops I expect of a big town - Body Shop, New Look, some form of generic sports shop that isn't a sports shop etc.


So maybe still technically an Urban Fox but with a country edge.

I like the new surroundings. I actually thought I would miss London more than I am.

We were slightly fortunate in that Dark Star Brewery opened a pub in the town two weeks before we were due to collect our keys. And it has become a regular haunt for us. Mid-week we make use of the free wi-fi to finish off some work before heading home for the evening, we have eaten in there a fair few times (and the food is AMAZING!) and it is also a regular stopping point on a Friday night.


There are also some other good pubs in the town - the Sergison Arms which is great for night I don't want to drink as they have Nanny State in the fridge and The Star has live music and a decent selection of beers.

There are a few more out of town but we haven't got round to trying these just yet although when summer arrives I suspect there may be a few country walks to the surrounding villages.

There are also a few other pubs in town which we will try at some point.


Food wise there is a great selection. We have the chain places - Pizza Express, Zizzi, Cafe Rouge, Cote, and Prezzo but there are also a lot of lovely independents too: Idlewild, La Campana, and Nizam are the ones we have tried but there are plenty more too.

As stated we have most of the major chain coffee shops but we also have our independents too: Torys, The Bay Tree and Flinders. There is a new cafe/restaurant due to open in the next few weeks as well.

So so far so good. I am sure we will have plenty of other stories to come as we get to explore the local area.