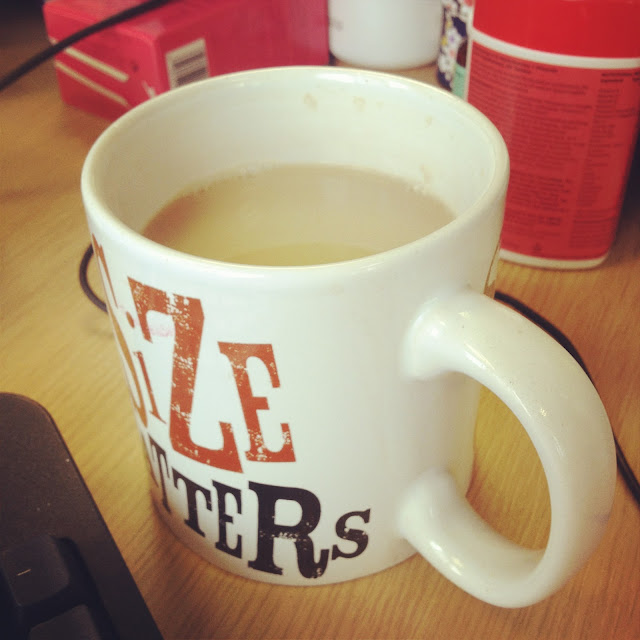 In my last post I mentioned my unfortunate brush with a nasty stomach bug.

I cannot remember the last time I was that ill. I couldn't eat anything and when I finally did decide I needed to eat something all I wanted was cream crackers and Haribo - super healthy it was not!

But I also had another side effect - I didn't want to drink anything except orange juice and water.

Now as someone who could easily drink 10+ cups of tea in a day this was a big shock to the system. I attempted a cuppa a couple of days after the initial illness but couldn't stomach it. I officially was off tea!

I continued drinking water and orange juice for the remainder of the weekend and when I went back to work on the Monday and decided to embrace a caffeine free lifestyle. By Wednesday I was having horrendous headaches. I googled giving up caffeine to be met from advice from the NHS that going cold turkey is not good for you.

Great! Giving up caffeine is harder than giving up smoking! I popped out and bought a bottle of Coke to alleviate the headaches. It worked but I felt annoyed at needing to drink soft drinks to get me through the day so kept it to a minimum of one per day.

Eventually about a month and a half later I finally felt like drinking tea again but not in the copious amounts I had in the past. And for the past for months I have only drunk a maximum of 2 cups per day (although having recently discovered iced coffee I often swap the second cup for one of those instead) and completely stopped drinking caffeinated soft drinks.

Winter will be a bit of a test as I do love hot drinks in the winter but I have also discovered decaffeinated  PG Tips which actually taste really good so expect I will be substituting a few of those come winter. I also love fruit tea and have found that to be even better in the mornings than a normal tea from my travel mug.

In terms of the effects, I have actually felt more awake despite cutting down on caffeine and I certainly am not missing soft drinks (although my reduction of those is also down to a healthier lifestyle (more on that at a later point). It's weird no longer being a tea monster after years of being one. But I feel this is a good thing and a healthy turn of events.
Email Post
Labels: Healthy Living Tea